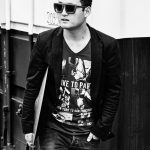 “Sven Rozier is a Drummer, Educator, organizer and composer. Born in Chun Chun City, South Korea, Sven discovered at a very early age that drumming was his passion. Later on he graduated from the Conservatory in Rotterdam, specialising in Jazz Music. Through out his career, Sven played all over the world with renowned artists at several big festivals.”

Also Sven is a organizer and is festival director of ”Around The City” and Jazzclub Leiden and head of Marketing and Communication of the Amersfoort World Jazz Festival.

Sven Rozier is also proud board member of the board of JazzNL.